Alpha-mannosidosis presents with a broad heterogeneity of symptoms, with the main features being:1, 2

At birth, the majority of individuals with alpha-mannosidosis appear normal, and their condition progressively delops over years to several decades, making most persons socially dependent and severely impaired in their motor function during youth and adulthood.2 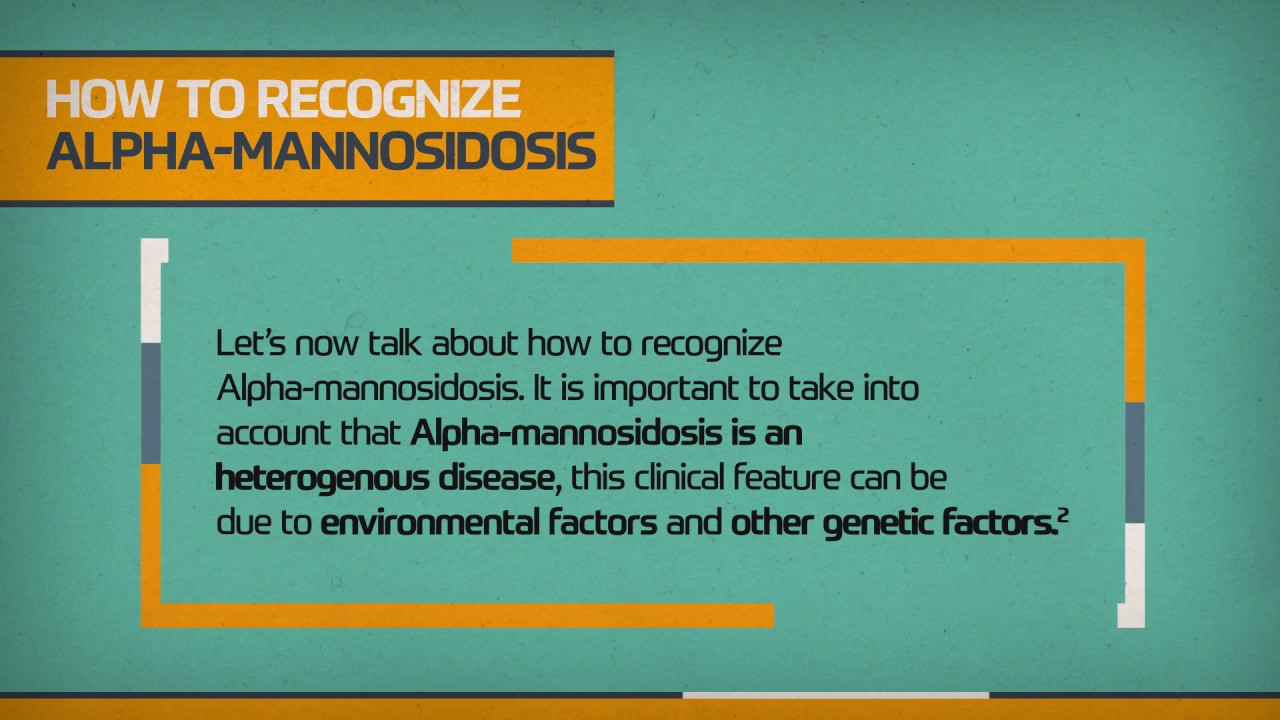 In alpha-mannosidosis patients, the first decade of life is characterized by frequent recurrent infections:2

The number of infections diminishes in the second and third decades, when ataxia, reduced balance and gait distance, facial coarsening and muscular weakness become more prominent clinical findings.2
As a confirmation of the relevance of recurrent infections in alpha-mannosidosis clincal presentation, in a quantitative analysis on 111 patients suffering of alpha-mannosidosis, the relative frequency of respiratory tract infections in the total study population of patients was assessed at 53,1%.3

Several facial traits are characteristic of alpha mannosidosis. Facial traits may be subtle, to the degree that they can even be overlooked by an inexperienced observer.4 However, independently of race and genetic background, all patients will have some degree of coarse Hurler-like features. Classically, the head is large with a prominent forehead, rounded eyebrows, flattened nasal bridge, macroglossia, widely spaced teeth and prognathism. The neck of patients is usually short.5 Depending on the severity, some patients will develop hydrocephalus in the first year of life.5

Skeletal abnormalities is one of the main feature of alpha-mannosidosis patients.1 Bone disease ranges from asymptomatic osteopenia to focal lytic or sclerotic lesions and osteonecrosis.4 Clinical or radiographic signs of mild-to-moderate dysostosis multiplex are present in 90% of patients. Conventional x-rays may reveal thickened calvaria; ovoid configuration, flattening and hook-shaped deformity of the vertebral bodies; hypoplasia of the inferior portions of the ilia; and mild expansion of the short tubular bones of the hands.4 The most frequent abnormalities are scoliosis and deformation of the sternum, which are present at birth.5 Genu valgus (knock-knee) is also common and contributes to gait disturbance. Similar to the same complication in Gaucher disease, genu valgus may be treated with epiphyseal arthrodesis at a young age before the epiphyseal lineation of the knee is closed.4, 5

Over time, in long-term survivors of the disease, from the second till the fourth decade of life patients may develop destructive polyarthropathy, especially coxarthrosis and gonarthrosis. Many of the skeletal abnormalities are so severe that orthopedic corrections are needed.5

In a natural history longitudinal study, 62% of patients <18 years and 92% of patients ≥18 years were found to have skeletal abnormalities, such as joint contractures, scoliosis, genua valga and hip dysplasia.1

Most individuals will have early-childhood-onset non-progressive hearing loss.4 Indeed, moderate or severe sensorineural hearing loss seems inevitable.5 In many, if not most individuals, hearing loss is partly conductive and partly sensorineural.4 Hearing deficit is regularly worsened by otitis or accumulation of fluid in the middle ear, thereby adding a mechanical component to hearing impairment.5 If untreated in early childhood, reduced hearing will contribute to disturbances in both speech and mental function.4

In a natural history study evaluating clinical and surrogate parameters of 43 alpha-mannosidosis patients, 100% of patients over the age of 3 years had significant hearing loss and had to wear hearing aids.1

Hyperopia, myopia, or slight strabismus are considered to be common. Lenticular changes, superficial corneal opacities, and blurred discs appear to be rare, but have been reported.5 Most of these ophthalmologic findings can be corrected.4

Alpha-mannosidosis patients show rapid decline in cognitive function during the first two decades of life.6 Early psychomotor development may appear normal, but intellectual disability is present in all individuals. Persons with adult-onset disease are usually mildly or moderately intellectually disabled with an IQ of 60-80.4 In many patients, the first symptom is often delayed development of speech or motor or mental functions with a declining tendency over later decades.5 The measurement of total mental performance is complex, and it has been reported that patients tend to score better in nonverbal tests. Individuals are late in initiating speech (sometimes as late as the second decade of life), their vocabularies are restricted and their pronunciation is difficult to understand, which may be a consequence of congenital and/or later-onset hearing loss.4

A 2015 study performed on 35 alpha-mannosidosis patients (6-35 years) on the cognitive function and activities of daily living showed that intellectual disability is a consistent finding in patients with alpha-mannosidosis but with extensive variation: despite their intellectual disabilities, there is a potential for continuous cognitive development, especially during childhood and early teenageyears.7

Psychiatric symptoms, distinct from the intellectual disability, may affect 25% or more of individuals with alpha-mannosidosis. Onset is typically from late puberty to early adolescence.4 In mentally retarded patients, psychiatric symptoms form part of a more diffuse clinical picture with systemic, cognitive or motor neurological signs. It can present with acute and recurrent attacks of confusion, sometimes with anxiety, depressions or hallucinations.5 Periods of psychosis usually last 3 to 12 weeks, and are followed by a long period of hypersomnia and may be accompanied by loss of abilities, such as difficulty speaking or inability to read.5 In four of the nine individuals, evaluation of the psychiatric syndrome did not reveal an underlying organic cause.4

Ataxia is the most characteristic and specific motor disturbance.4 The development of motor functions in affected patients is generally slow, and children appear clumsy. This is caused by a combination of factors including muscular weakness, joint abnormalities and ataxia due to cerebral atrophy and cerebral demyelination.5 As such, affected children learn to walk somewhat later than normal.4

In addition to joint abnormalities and metabolic myopathy, the disease affects areas of the brain that are responsible for fine motor function and muscular coordination. Muscular hypotonia is common. Spastic paraplegia has also been described, but in general, spasticity, rigidity and dyskinesia are not seen.4 Motor function impairment is progressive by nature, with gradual worsening in the second and third decade of life. However, there may be considerable variation in clinical progression.5

Immune deficiency is also one of the main feature of the disease: patients with alpha-mannosidosis suffer from recurrent infections, especially during the first decade of life.5 Analysis of humoral and cellular immunological functioning has demonstrated that post-immunization levels of antibody are lower in patients with alpha-mannosidosis, thus showing a decreased ability to produce specific antibodies after antigen presentation.5 Although infections generate compensatory mechanisms in leukocytes to improve phagocytosis, these mechanisms are inadequate because of disease-induced phagocyte-blocking agents in serum or because of the lack of specific antibodies. In addition, leukocytes have a decreased capacity for intracellular killing, which may contribute to the frequently serious outcomes of bacterial infections.4

In alpha-mannosidosis, increased levels of oligosaccharides in plasma are found. Oligomannosides with five and six mannose residues bind to interleukin-2 (IL-2) receptors and alter IL-2-dependent responses. Since IL-2 activates T-, B- and NK cells, it can be hypothesized that blockage of this receptor might be responsible for the immune deficiency present in alpha-mannosidosis.5

Cardiac and renal complications are rarely encountered.4 End-stage kidney failure has been reported in only one case, which was managed by kidney transplant. In some case descriptions, a murmur of the heart has been noted, but manifest heart disease has not been documented.5